The Spartan Aircraft Company was founded in 1928 in Tulsa, Oklahoma. In the late 1930's Spartan was acquired by the Getty Corporation owned by the famous billionaire and oil tycoon J. Paul Getty. At the end of WWII Getty had to decide where he was going to take the company next. With the great need for housing after the war, Getty determined that trailer manufacturing would be the way to go. The first prototype was made in the summer of 1945. The first models rolling off the production line in the mid 40's to early 50's could be considered true travel trailers. Spartan spared no expense on their trailers. They were of the highest quality and sleekest design. By the mid to late 50's Spartan began to make larger trailers, or homes, as Spartan called them.

During the 2020 COVID-19 shutdown Anna, Justin, and Sully spent much of their family time in the shop working on their most recent spec trailer. (You can view the video on our Flyte Camp You Tube Channel here: https://youtu.be/QjhuuUmtANU) The 1948 Spartan Manor is one of Anna’s all-time favorite trailer models. While much of the building was completed by Justin, he emphasizes that it was Anna’s idea, design, and new floor plan that made it a reality. “The Spartan Manor was what originally got Anna started in all of this craziness. After twenty years, she was finally able to re-create this Spartan Manor the way she has always wanted to. She loves it,” he said about the trailer after their most recent camping trip to the coast.

This 1948 Spartan was in pretty decent original condition when we picked it up. We went to a few shows with it before deciding to maximize the space with a bathroom, updated electrical, and some key design nods to the original Spartan trailers. With seventy-two years of use, it was necessary to refresh the trailer from the frame up to accommodate modern amenities.

The restoration started with removing the body from the frame. With the body off, we were able to address years of wear and tear to the frame as well as run new wiring and install a new subfloor. New Marmoleum flooring in Trace of Nature, part of their Striato line, was selected due to its similarity to original Spartan flooring. The linear pattern creates an illusion of a larger space, guiding your line of vision from front to back. The browns in the pattern match the birch paneling.

Four coats of Spar varnish really make the birch paneling shine. The majority of the original cabinetry was meticulously restored and reinstalled. The original Spartans had a red and white grid patterned backsplash in the kitchen. We re-created the original Masonite backsplash using a thin plastic with the grid carved into it. Marmoleum was chosen, this time in Earl Grey Chocolate, for the countertops. The original oven was refurbished. The oven cover was given a new shine with a few rounds of sanding and polishing. An original Frigidaire fridge had some body work completed and the original color re-applied.

The bathroom is a new addition as previously mentioned. A vintage Pullman sink was installed above the toilet so it could be tucked away while not in use. A stainless-steel shower was also installed with a teak floor. The bathroom door was created with the signature porthole window and privacy glass for allowing additional light into the small space.

For the upholstery, Anna was inspired to maintain an original Spartan theme. Plaid was chosen to lend a 1940’s feel of camping by the lake and going fishing that is reminiscent of the era. The plaid wool blend includes the colors grey, a great neutral, as well as blue and red. The original Spartan logo is red and the color makes appearances throughout the trailer as a nod to original Spartan design. The commercial grade tweed upholstery fabric is in a complementary neutral grey tone reminiscent of a traditional mid-century fabric. These fabrics were used throughout the trailer, maintaining the theme from the sitting area to the bedroom.

This trailer shines as a true classic with tasteful modern amenities. With its inviting warm wood interior and very functional layout it’s the perfect escape whether in the backyard or on the road. 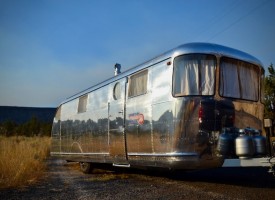 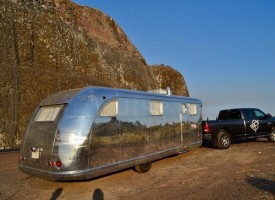 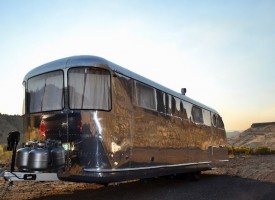 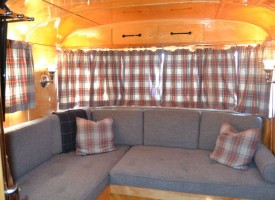 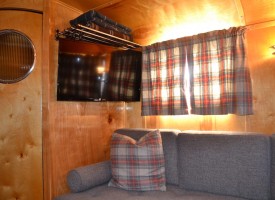 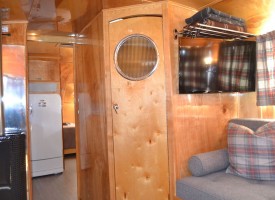 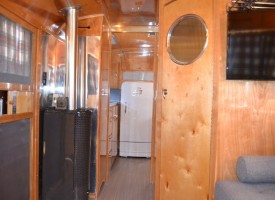 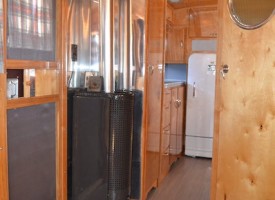 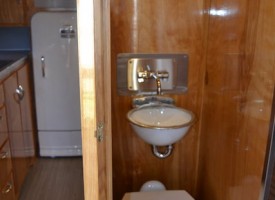 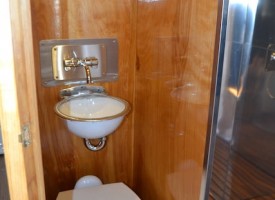 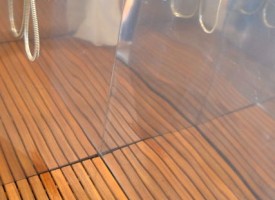 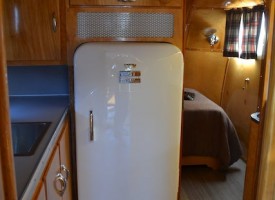 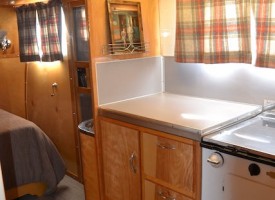 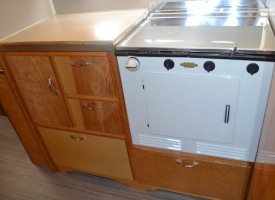 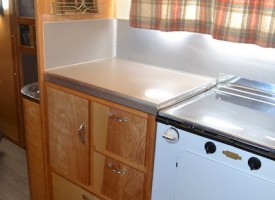 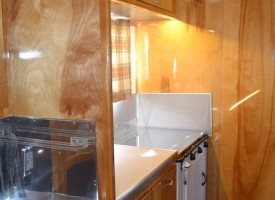 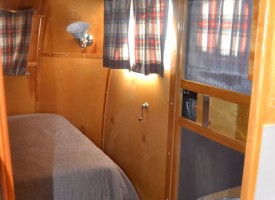 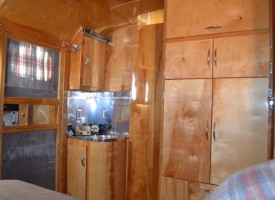 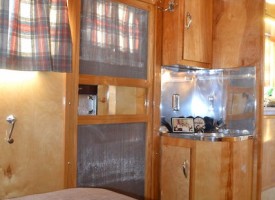 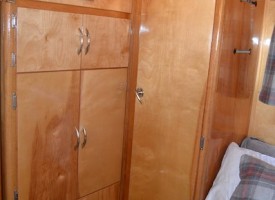